Neutrality isn’t an option when it comes to accessibility

Published by karlgroves@gmail.com on August 31, 2022

Not long ago, a recent Tweet by Accessibility.com and corresponding post on LinkedIn resulted in significant backlash from many prominent voices in the accessibility community. Both postings received dozens of negative reactions due to the organization’s proud acceptance of sponsorship money from accessiBe. In reaction, Accessibility.com claimed that “At Accessibility.com, we believe in providing unbiased access to all accessibility information. We believe in inclusion and working together to further the cause.”. This statement was no better received than their initial posts.

A few days later, I got this email: 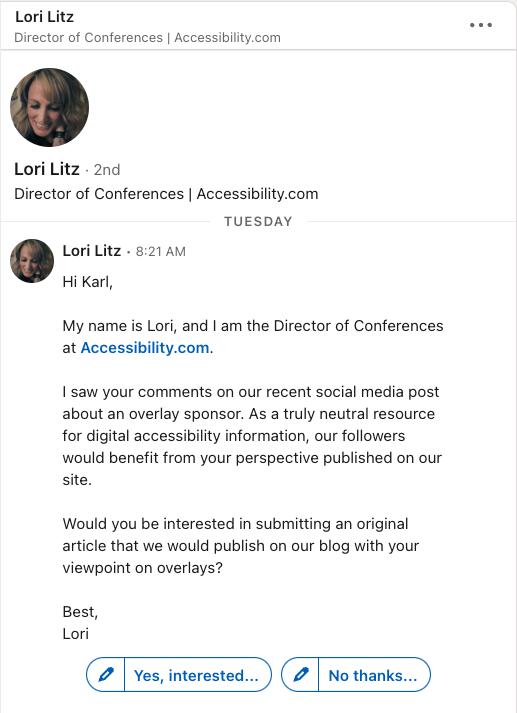 While I have an array of thoughts on the above request – not the least of which is the traffic boost they’d get from me publishing an article on their site – I’d rather focus on this idea of “neutrality”. Neutrality isn’t an option when it comes to accessibility.

Neutrality isn’t noble, it is cowardly

The classic case of neutrality that everyone usually points to is Switzerland. Switzerland maintains a state of Armed Neutrality in which its military’s role is one of defense. Switzerland has the oldest policy of military neutrality in the world and has not participated in a foreign war since its neutrality was established by the Treaty of Paris in 1815. But Switzerland is not entirely neutral. Following World War II, Switzerland received a large amount of (well-deserved) backlash for its continued trade with Germany during the war. Since that time, their foreign policy has been dedicated largely to humanitarian activities and they are strongly aligned with EU interests. While Switzerland remains militarily neutral, they still took steps to impose sanctions on Russia following Russia’s invasion of Ukraine. In the words of Dante Dante Alighieri, “The hottest places in Hell are reserved for those who in a period of moral crisis maintain their neutrality” It would seem that even the Swiss realized this after World War II and, while I wouldn’t call for anyone to burn in Hell for supporting overlays, the sentiment is an important one. Cowards choose to look the other way when seeing a moral or ethical transgression.

For a long time, people have given overlay vendors a “pass” by choosing to believe that because overlays can fix some things, they’re “better than nothing” I find such sentiments to be borne from an incomplete understanding of the issues surrounding overlays. The issue with overlays isn’t simply that they can’t fully render a web page into an accessible state, though that fact alone is surely enough to warrant avoiding them. There are much bigger issues at play, not the least of which is that people with disabilities hate overlays! They hate them so much that they’ve created browser extensions to block overlays!

More nefarious, in my opinion, is the long established practice of lying that is nearly universal among overlay vendors. With relatively few exceptions, overlay vendors are consistent in perpetuating a dozen types of lies when marketing their products. While some people may suggest that lying is somehow commonplace in business, it is not. Furthermore, it is illegal:

In addition to false advertising being a violation of Federal law, all 50 states have legislation aimed at protecting consumers in their state from deceptive practices. 19 states have adopted the Uniform Deceptive Trade Practices Act while the remaining states have their own, similar laws. The consumer protection laws in 49 states explicitly forbid false advertising. Overlay False Claims

These lies don’t just impact the customer who buys an overlay. They also impact end users with disabilities because when a company buys an overlay, they stop doing anything else. Case-in-point: Murphy vs. Eyebobs. In this case, Eyebobs’ argument was basically (to paraphrase) “We use accessiBe and therefore we don’t have to do anything else” This stance is a perfectly understandable one given the many (false) claims accessiBe is known to make. But, holding that stance has a real, negative impact on people with disabilities. The result from that stance is that the customer’s website is not made significantly more accessible and that end users with disabilities are still unable to gain full and equal access as required by law. This, in a nutshell, is ableism in action.

Attempting to claim neutrality on the issue of accessibility overlays is, at best, cowardice. An argument could be made that it is complicity. As Desmond Tutu said: “If you are neutral in situations of injustice, you have chosen the side of the oppressor”

Almost 730 people across the globe have signed The Overlay Factsheet. Those 730 people have taken a stand to do better on behalf of people with disabilities. They understand that neutrality isn’t an option when it comes to accessibility.

Published inAccessibility
Manage Cookie Consent
To provide the best experiences, we use technologies like cookies to store and/or access device information. Consenting to these technologies will allow us to process data such as browsing behavior or unique IDs on this site. Not consenting or withdrawing consent, may adversely affect certain features and functions.
Manage options Manage services Manage vendors Read more about these purposes
View preferences
{title} {title} {title}