My history of hot rodding (part 2)

I’ve always sort of had this dissatisfaction with what I had and a desire for more. While this can sometimes be translated as “ambition” as a young adult, it led me to making immature, short-sighted decisions. Among them: selling the 70 Camaro described in part 1. There I was, daily-driving a car that ran well and had a fresh paint job and brand new interior. Still, for some reason, I wanted something “better”. If only foresight was as strong as hindsight.

Don’t get me wrong, I loved this car. I sold the Camaro to a friend of a neighbor, named Robert, who (rumor has it) ended up smashing the Camaro into the wall at Capitol Raceway in Crofton MD. After I sold the Camaro I went searching for the next thing. I passed up a pile of really cool cars:

Eventually I found a very good deal on a 1976 Corvette Stingray. I bought it for $6200. It had a fresh paint job because the guy I bought it from had a body shop. The owner of the Corvette got the car painted and then never paid the bill. The body shop owner took the car on lien and put it up for sale and viola! 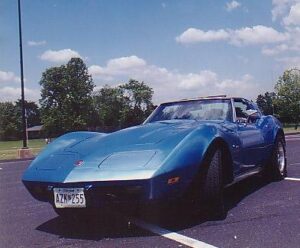 The Corvette was a fun car, for sure, though it was much less powerful than the Camaro. To this day, it goes down as the slowest car I’ve owned. The 1976 Corvette came with a paltry 160 horsepower thanks to Chevy choking the car down with emissions equipment. However, the car did handle very well compared to the Camaro. But, the car was a bit of a pain in the ass, to say the least. 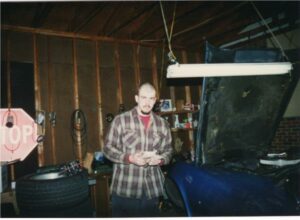 The Corvette was plagued with countless silly things failing all the time. Keeping in mind it was 18 years old when I bought it, these issues were understandable, like the power steering pump going up, the power steering cylinder going up, and other misc. stuff needing to be replaced. In the picture above, I’m in the garage working on the brakes which, I learned, are a notorious pain in the ass to bleed properly without a pressure bleeder. Finally, I experienced a failure in the transverse leaf spring in the back suspension at highway speed. While it didn’t damage anything else, it sure was embarrassing to finish the last few miles of my trip with metal dragging behind me!

The Corvette was a car I will remember fondly and I might even buy one again someday. But in early 1996 it was time to go. Up next: a diversion!